Less than 2 weeks after Intel 's internal roadmap was leaked, Apple announced their new M1 Ultra chip. Intel are looking to exceed the efficiencies that Apple have achieved but are basing that all on where we are today by the sounds of it, not where we'll be by that time.

Tests show that a laptop with Intel's latest i9 Core chip only lasts six hours for video playback. In comparison, Apple advertises the latest 16-inch MacBook Pro as getting up to 21 hours of battery life for offline video playback.

That is some difference between the two...

I don't doubt that Intel's intentions and claims that they can already beat Apple in terms of raw processing, but the power consumed is not a trivial matter. With Apple's two year transition from Intel to M-series chips, how far away are we from being the second generation offering? We started with the M1 (MacBook Air, 13" MacBook Pro, Mac Mini, iPad Pro and now the iPad Air), followed by the M1 Pro and M1 Max (both in the 14" and 16" MacBook Pros) and ending the transition with the M1 Ultra.

Maybe we'll get a form factor that allows for Mac Pro like configuration bringing more choice for professionals, but I'd guess the next silicone announcements will be a new generation of chips. Maybe Intel can catch up in that time, but can they take the lead?

When I’m next in the market for a new computer the performance boost the M-series chips bring will most likely go unnoticed. It’s the efficiency and extended battery life that will make the biggest difference for me. 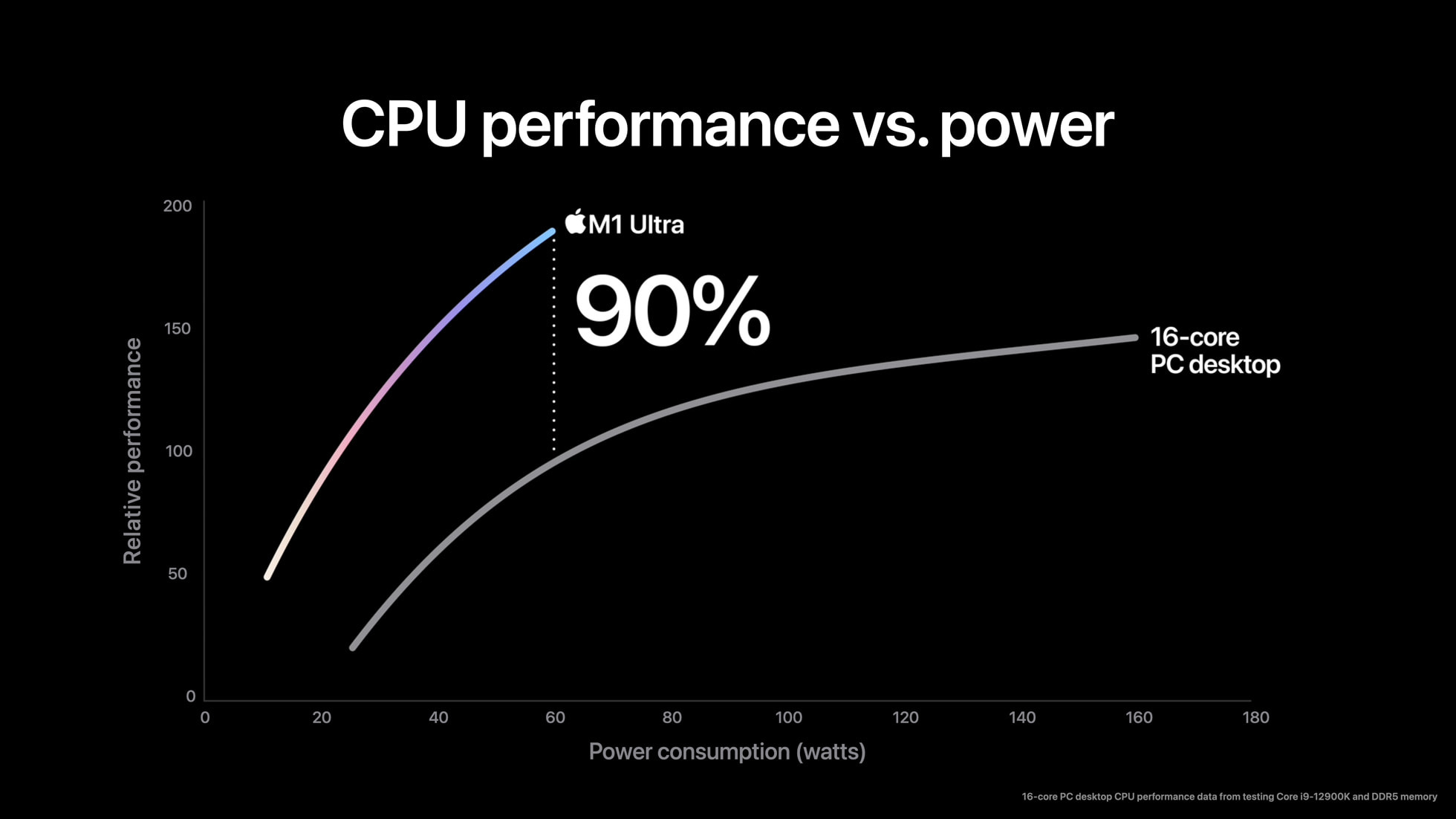 This chart blows me away, and did when they first announced the M1 back in November 2020.

In the same way they unified the architecture and brought the CPU, GPU, RAM and neural networks together, Apple have also changes how chips can be combined by literally joining them together via UltraFusion.

The new chip lives in a new product too, the Mac Studio looks like a taller Mac Mini.

I quite like the overall look, nice to see Apple fully embrace ports again. I did wonder why the SD card didn't live under the front-facing USB C ports, but it would probably look like a serious face.

An all-in-one (iMac Pro) might have been preferred but given the cooling architecture required, it doesn't seem like Apple could just scale up the 24" iMac. Maybe if we were only talking about the M1 Pro and M1 Max chips, but the fans required and materials used to dissipate heat, the Mac Studio looks like a good solution to the problem.

I'm looking forward to the reviews of the Mac Stadio, I'll update with links to the best ones. It will be fun to see how different people put it to the test as part of their reviews even though I don't foresee one on my desk at any point in the future.

A couple of odd decisions around this one...

First, it has a A13 chip to power the webcam with Centre Stage. Great decision, but there's no camera in the obscenely expensive Pro Display XDR.

Next, the display comes with one mount type of your choosing. At time of purchase you have to choose if it should be mounted on a swivel stand, a swivel stand that also allows you to adjust the height or a VESA mount.

Maybe in most cases the initial choice is it, but it doesn't look like it can be rotated 90° without being wall mounted. The Studio Display is not cheap by any means and not having any flexibility is a fairly big knock to it.

Overall, it seems to be a fantastic successor to the Apple Cinema Display that is long overdue.

Jump to notable items for Week #228, Week #230 , view the notable archive or my favourites.